Doors: Some (or Much) Assembly Required

Fifteen years into my service as business Attic Access, in metro Portland, Oregon, I find myself in a binge of calls for broken attic ladders made in Southeast USA, where fixing is the best response.

This now-repaired attic ladder, lightly used and perhaps thirty years old, was found dysfunctional at both limit arms, as I call them. The upper pivots were very loose, with springs and arms jammed akimbo; cleverness demanded to deploy or stow. It is now better-than-new and should live on another thirty years and more. With sturdy limit arms, longevity may come of care to not let step section hinges come apart with lost nuts and bolts. 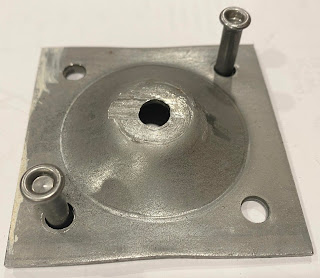 Here is one of the flimsy mild-steel upper pivot cups from a much newer Werner WH3008 ladder that I demolished for recycling of the metal. The factory-installed limit arms were ruined when big rivets serving  as the upper pivots, ripped out. Functional replacement arms could not be found. The ladder would not have failed if the pivots had been strong lag screws binding to the ladder rough frame. The manufacturer sought simplest construction (the dumb rivets protruding here), installation-ready out of the shipping packaging. The installer overlooked the need to set long lag screws into the two holes not riveted to the ladder frame. The ladder frame then would measurably flex from heavy loads every time the ladder was operated, contributing to the pivot-rivet failure.
Competent installers of ordinary doors have learned that lesser loads, even just the weight of a door, can not be supported by the door frame. Door loads are transmitted through the hinges, wanting to twist the frame. At every hinge, an appropriate screw to the flimsy 1x ladder frame, must be replaced with a screw binding to the much stronger, heavily nailed-in rough frame.
The many-tricks in correct installation of an ordinary prefit door are well taught by trade show master presenter Gary Katz, The Katz Roadshow. I am a very uncommon resource, in offering useful techniques for the installation of an attic ladder, more tricky in its need to bear the very large loads of a person's weight and carried objects. Lesson One: Never rely on the ladder frame to bear the loads, despite claims of rated load-carrying.
So, a ladder manufacturer will do well to include many installation steps that directly apply carried loads to the rough frame. Clearly describe them. Don't pretend that any uninstructed person with a saw, hammer and nails, can get the job done, with a rube helper, in a half hour. I fully disassemble a ladder for installation, safely and better, working alone. I sometimes extract the door from the frame. Arms and springs initially loose, are installed on the job. It takes a full day, and more, with needs of patching that often dictate the door removability.
With an attic ladder or any door, assembly is required.
In the ladder now to be repaired, study the failed upper pivots of the limit arms. 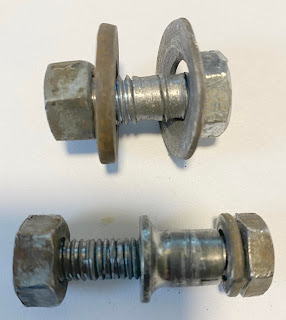 3/8" x 3 1/2" lag screws and large 3/8" washers replace a badly worn assortment of short machine bolts, a  bushing,  a couple of 3/8" nuts and a variety of washers loose and tilted at center of the cup mount.
Two 1/4" x 2 1/2" lag screws at each cup replace assorted wood and machine screws bound only to the 1x4 ladder frame, nuts falling the the floor when released.

All of this failed experimentation and years of frustration with the ladder would have been avoided if, from the beginning, at ladder installation, the springs, arms and cups had been packaged loosely, for assembly required of the installer, with lag screws as chosen now, binding to the rough frame. Choose drill sizes for the lag screws, that are not too large. Find the screw hole locations in the ladder frame clearly labeled. 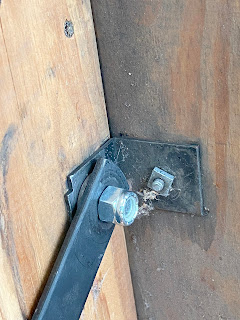 I made poor choices too, in reliance on fasteners from a nearby Home Depot. 3/8" x 1 1/2" coarse-thread hex bolts should have been 2" instead, permitting a washer  outside the arm and under a lock nut, at each side of the arm lower pivots. Home Depot is not a full-selection hardware store. They do not offer lock nuts for these coarse-thread bolts.
Find the lock nuts at an Ace Hardware. Then regret my choice of bolts. This lock nut is safely engaged on a 1 1/2" bolt, but just barely.

A Safety Pole and More:

Having offered a simple repair, I shall avoid offering other services. 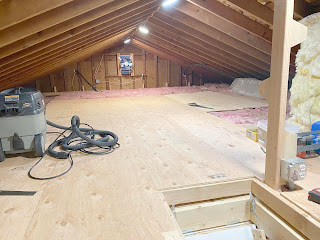 This is my job-in-process at late-December 2022, with a safety pole always included. A safety pole is a selected pretty 2x4 rock-solidly bridged between floor joists and roof joists with three or more hand grips, and with power and lighting control attached. 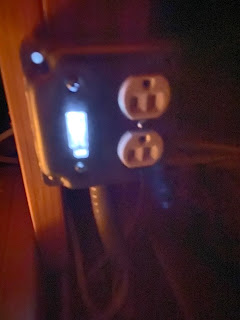 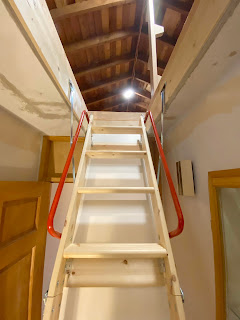 One or two sturdy handles in-reach while not hanging onto the safety pole.
The work of a competent installer can include much custom assembly specifically suited to the unique opportunities in any home.
Safety is priceless, and affordable.
Posted by Phil Norman at 1:02 PM

Phil, I always enjoy your blog posts. They are very well written, detailed and include photos.