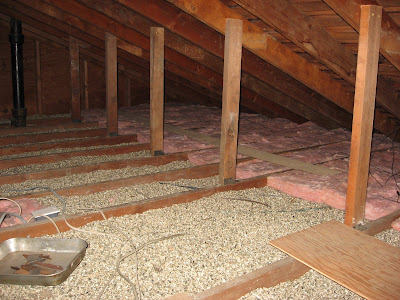 In December, 2006, I added batt insulation in this attic, grading vermiculite to a uniform distribution, while wearing a respirator. I would do better now, with advice from a competent testing laboratory, and mindful of US Government advice at:

Without negative confirmation, it should be presumed that vermiculite and many other construction materials have small asbestos content. Testing to a negative for vermiculite is expensive in the current method, with three gallons of material, taken in one gallon complete cross sections.  If an installation is positive for asbestos, mitigation is expensive, perhaps $10,000 in this very large attic. After mitigation, by a licensed abatement contractor, I would still not bet on absence of asbestos. Who knows where particles might have settled, to be stirred up by intrusive action such as drilling for wiring placement. I would rather be warned by visible vermiculite, to take protective measures.

The protective measures include careful wearing of a HEPA-filtered respirator, with appropriate control of respirator elements and clothing.

In an attic floor, vermiculite adds to step-through safety concerns, adding justification of lighting and safety decking.
Posted by Phil Norman at 6:34 PM No comments: