Controlling a security light to come on only when needed is a painless way to add an increment of energy responsibility and independence.

I have had this very satisfactory lighting arrangement at the front of my house, since May, 2014. Above the house number see a Atlas Guardian Pro MLGS180 light and motion sensor that controls lights along with a SPDT wall switch inside, just below in my living room. I call single pole double throw for the switch, and bought one, wrong color and odd. An ordinary 2-way switch is what you want; same thing. The 2-way switch with the Guardian sensor, allows forced-on operation, whether or not motion is sensed, in darkness. Want a sensor with options. 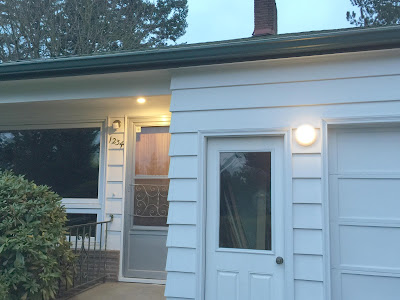 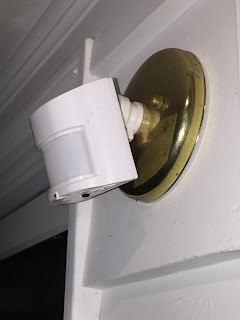 Here is my Atlas Guardian Pro MLGS180W with effective simple mounting upon a luminaire ceiling mount selected from a bin of  Portland reclaimed parts store Hippo Hardware. I had to enlarge the post hole with a file. The still photo missed the periodic, pretty red blink warning of motion sensed. The black slider switch on sensor bottom face has on-hold choices of 10 minutes, 5 minutes 1 minute and TEST. A  sensitivity control RANGE, matters, and a medium setting works best for me.

Please know, Atlas has discontinued this product. Why, I want to know. And, I must now find an equivalent product for mention here.

I am served by Pacific Northwest electrical wholesaler, Platt . Find that my Atlas MLGS180W is still available at Platt, for hefty $50.83. A competing product with same features or better is this:
Desa SL-5316-WH 500W DualBrite Sensor , $21.78.
What has happened? The Atlas product was imported from China, not somehow made more expensively or better. Was it killed by too-aggressive mark-up?

At the Platt website, I am surprised to find this statement of very excellent Customer Service hours:
Call For Availability
800-257-5288
4a-midnight (pst) 7 Days
Platt has excellent brick and mortar service of the USA western states, and aspires by excellence, to online sales and service, nationwide. A knowledgeable, nice, real person in Beaverton, Oregon headquarters answers, quickly.


At Fall, 2018, I find that Platt still has an inventory of Atlas sensors now-discontinued. The preferred offering is tiny SMS 500, by RAB Lighting , 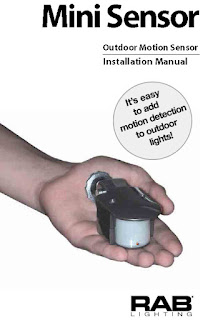 This illustration is from a PDF Instruction Manual .

Two, to control a string of three lights at the edge of my garage and back entry door. Either, activated by darkness and motion for a set interval, will power the string.

I knew to bench-test this before commitment to on-house installation, and was dismayed. Each sensor goes into a self-test mode every time its source power is interrupted, to be confused with other test variables.

Again, this was maddening as complication of my bench test. Furthermore, I could not see this as anything but confusion for future home occupants who might unintentionally switch off the source power, then unaware of the now-needless invitation to get out a ladder and play with sensitivity and aim settings, at raising the switch. I had another set of sensors to test, and immediately preferred them for simplicity, lower cost and rock-solid behavior as-expected.

Choose:   Coolwest, found at ebay   Illustrate as soffit-mounted, with no visible wiring. Pull 18 ga leads for a sensor through a 1/4" soffit hole, hidden from view. 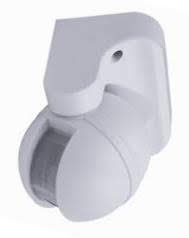 A negative in this decision is inability to command lights-on at night, independent of motion, with the wall switch. The ability of manual control is not missed where lights reliably come on and stay on with usual continued triggering by motion, at darkness.


The RAB sensor has a Manual Override of Automatic control:
Keep lights on by flipping the wall switch two times within 5 seconds. Sensor resets to auto mode at dawn. 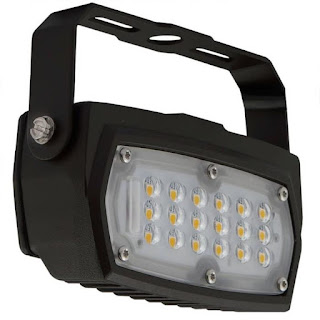 I choose these unhappily, by default. They are tiny and too glaring, but nothing better is found.

As with the PIR sensor, pass wiring simply through a soffit hole. Drill through the hole in the center of the yoke, just big enough to pass the hefty power lead into space above the  soffit. 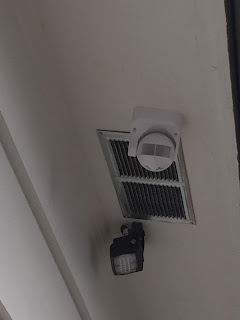 The installations are at newly-added soffit vent openings, where wires can be easily pulled from a control panel in the attic, then twist-connected to the short, hefty lead installed by the manufacturer. See that light power cables feed through the yoke opening and a minimal drilled hole in the soffit.

This is the sensor activated an night when the back door is opened, and one of two lights at the back olf the house. 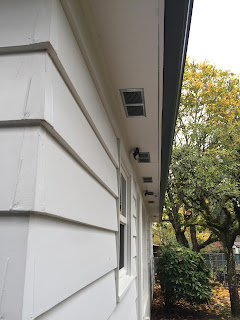 Both lights at back of house: 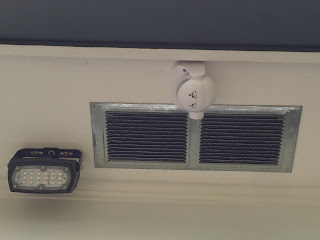 Here see minimal and sufficient controls, visible at bottom of a sensor. Controls are Sensitivity and Time-On. 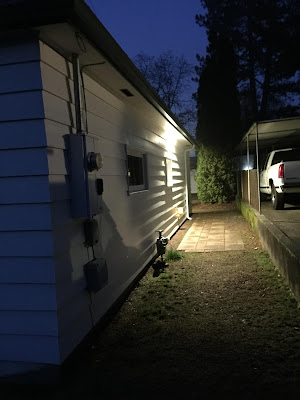 Lights come on at this proximity to the front of house and driveway.

In all of this I was somewhat perceived as a trouble-maker at professional-electricians-store Platt. It seems electricians do things differently. I defend myself with report that I had a constructive conversation with RAB Engineering, welcoming the sensor returns.

Living increasingly as a political person, door-knocking and circulating petitions, I find that intelligent security lighting is rarely found. The average discovery is of dead incandescent fixtures or of CFL or LED mis-directed or wastefully hidden in a can. Let us see security lighting as important to safety of both occupants and welcome visitors. See. Don't stumble.
Posted by Phil Norman at 6:16 AM No comments:

Email ThisBlogThis!Share to TwitterShare to FacebookShare to Pinterest
Labels: My House, Outdoor Lights

This looked to me, like Glimpse and Nicor DLS10, a reversion to junction box mating with screws revealed under a pretty access ring. I should have known better, where it is described as "driverless", then some cheap stamped-pan thing. 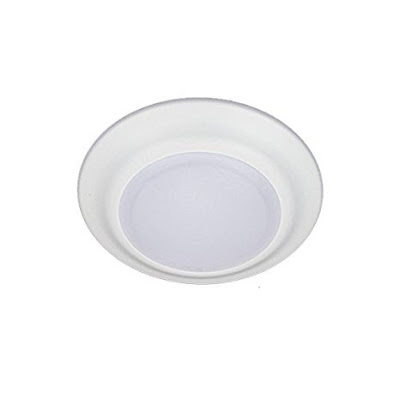 As a dutiful reporter, I did show respect for yet another Amazon offering of a seemingly pretty LED disk downlight. The Amazon asked price is $24.95. I got a tempting better deal at Bees Lighting , $19.80 and free shipping. I should now be grateful and uncritical. 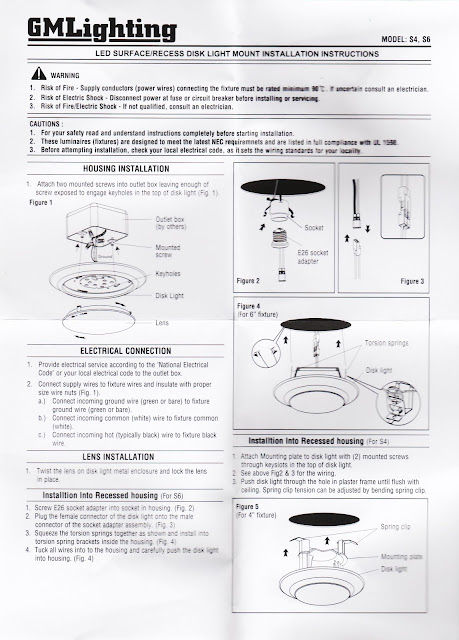 This is not offered with hardware to clip into a can light.


See the many slots that will be unprotected against intrusion of light-seeking-always bugs, to die in a pile of litter upon a loosely-attached obscuring lens. An informed installer might tape over the screw keyways. The large openings of lens keyways CAN NOT BE BLOCKED. Seal the junction box air tight, as I do, or don't install such cheap lights. 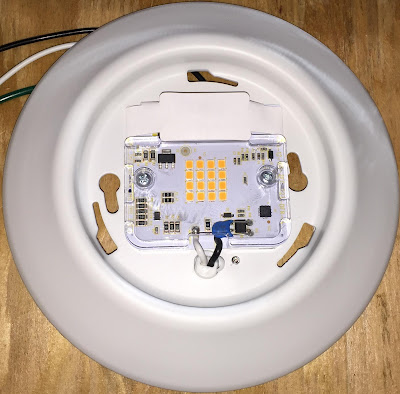 Keyways for box screws are at small 2 3/4" pitch.  Boxes with the small screw pitch are the most likely to be badly installed, with large visibility of spilled light. 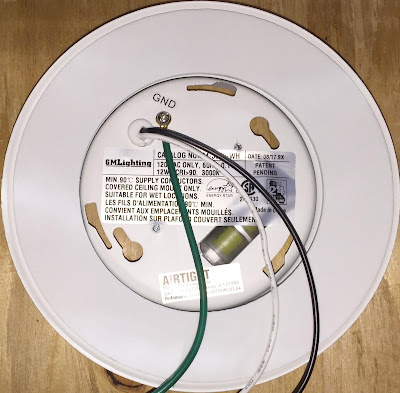 Take this side by side comparison as confirmation of GM S4 claimed brightness and color temperature. 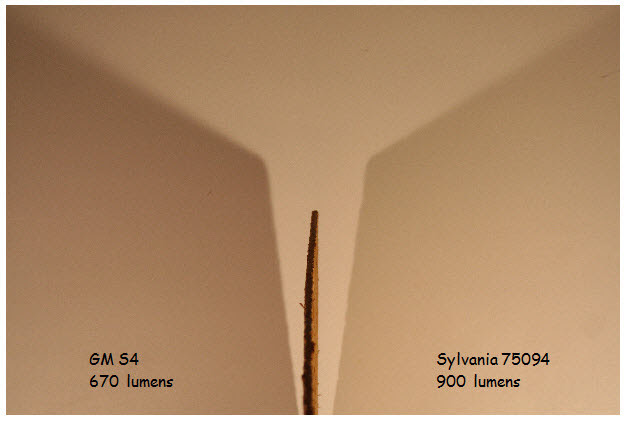 If glare numbers were required in advertising  and on packaging, the mindless degradation since Sylvania 70732 v1,  might have been avoided. 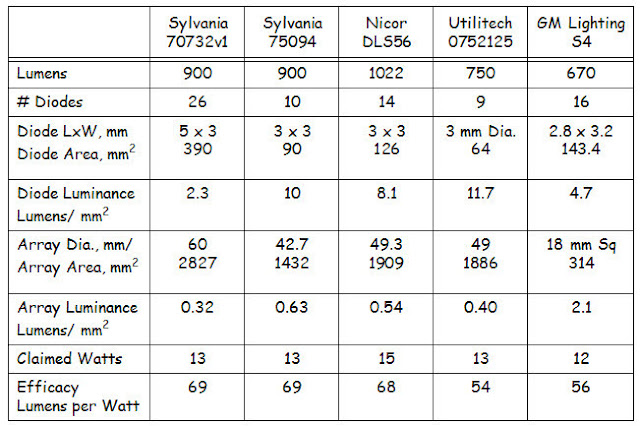 Posted by Phil Norman at 7:56 AM No comments: