I'm looking for a 450 lumens dot, better than 4" Glimpse . A 450 lumens directional down light gives illumination below equivalent to a 100 watt point-source light bulb. I assign this illumination a Brightness Number B4, and think it will be the preferred unit of residential lighting. It is just right in my opinion, in eight-foot ceilings over hallways and other small spaces, as for a bath tub or shower.

I have proven the 4" Glimpse equivalence to a 100 watt incandescent in many unambiguous side-by-side comparisons, including this, my first: 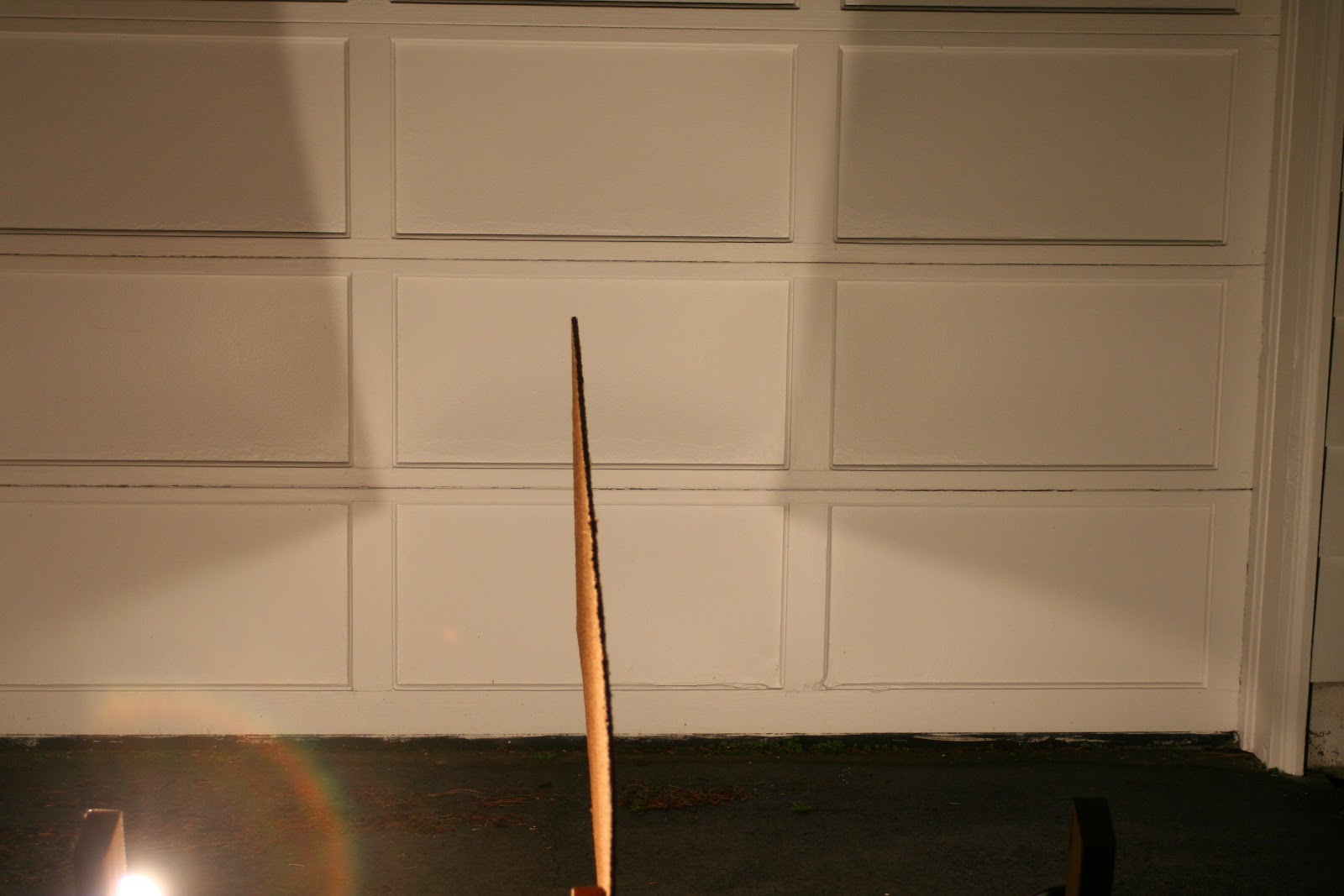 100 watt incandescent at left. 4" Glimpse 3000°K, 450 lumens on right. The darker divider shadow would be behind the less-bright light. With slightly different color temperature, I call the two lights equal.

It is tragic when this Glimpse fully-revealed directional LED light is packaged as equal to a useless 45 watt bulb. Little wonder it is so poorly known, and not yet respected. 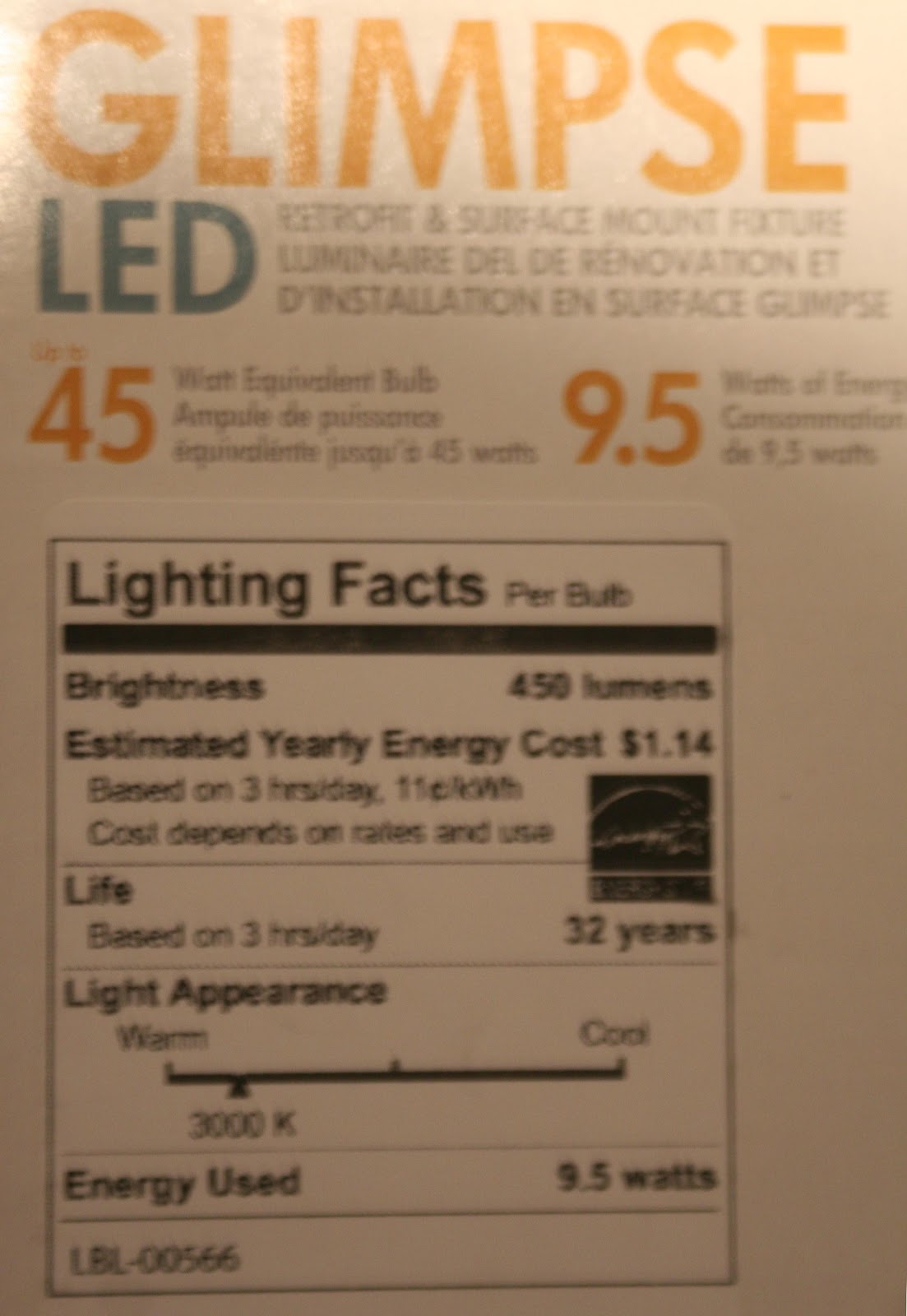 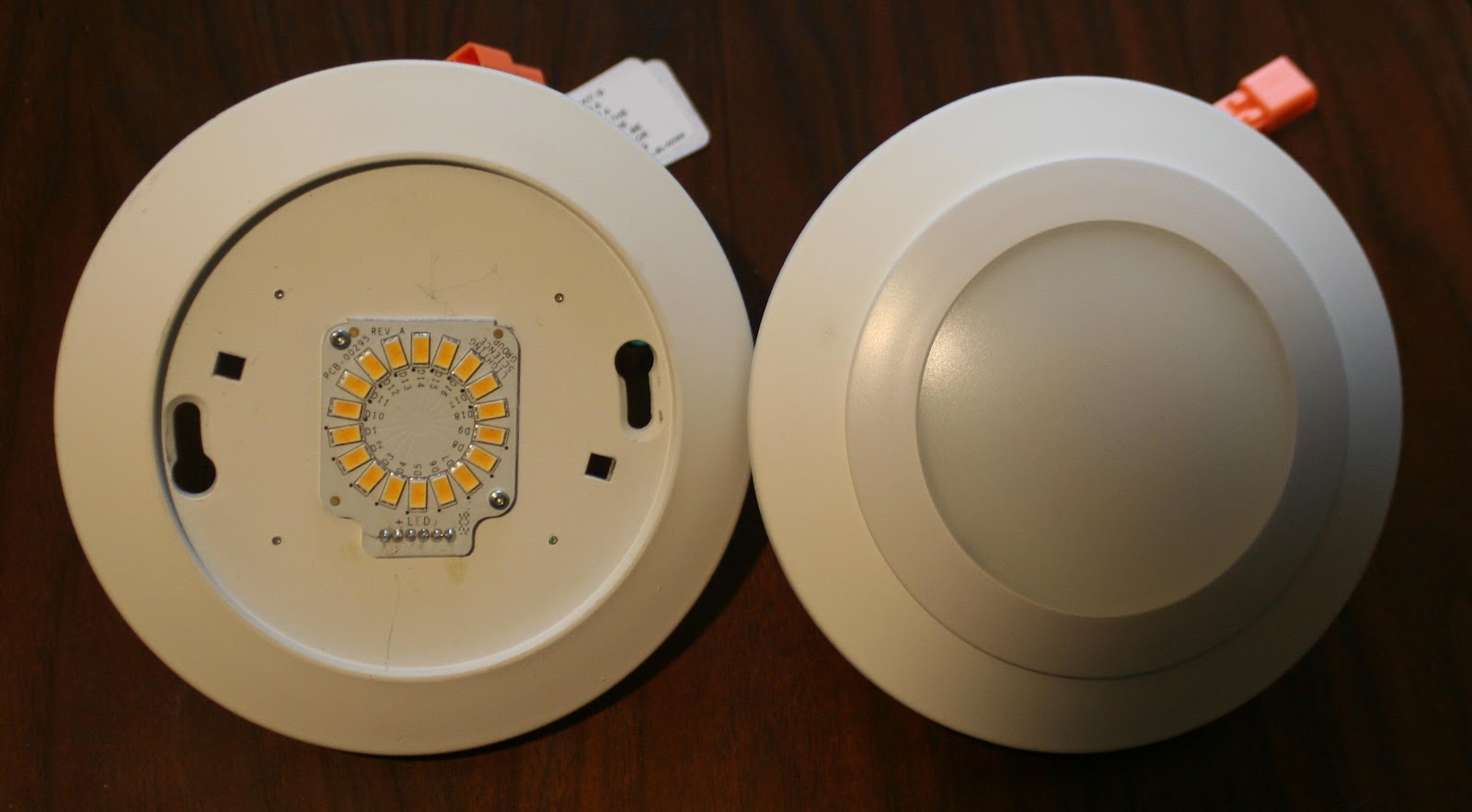 The 4" Glimpse diodes are tightly spaced on a simple board, slightly recessed within the lens frame. This four-year-old technology is now ancient, yet I know of no better light for its purpose. Know that it must be mounted on an air-tight box, else lens and mounting screw keys shine, attracting bugs. Despite defects, every lighting professional should experience this light. I recommend purchase at LED Lighting Wholesale . Look for then, and promote something better, in current technology.


Who will deliver a consumer luminaire with this better Samsung LED board of about 450 lumens?

The diodes are distributed better than Glimpse, and will be less glaring for same lumens.
I do find the source. Buy the boards here:
http://components.arrow.com/part/search/STIDMW830042112AAA%20?region=na

Who buys boards in this way, 180 minimum order? Please let it be someone who will package with least heat sink mass, a simple covering lens, push & pluck audio-jack connectors, and by-room DC wiring with in-wall conversion from house power. Can we move in this direction, away from stupid light bulbs, absent leadership for standards, as in a new L Prize?

This is my better L Prize vision:

I have proposed to US DOE that promoted LED lighting be as low-voltage DC-parallel strings of simple and small shining disks. We need a standard for a new common DC connector. This standard world-wide may be determined by competition as better expenditure in a next phase of the L Prize, than any new and stupid light bulb. All new light bulb installations stand in the way of adopting OLED when, soon, they are ready. The new L Prize for the connector sets a basis for the "starry skies" in our future. Luminares that clip into L Prize connectors might be called star lights. Such lighting will be dispersed and of small not-glaring size. Many of these little glow dots will be set in art pieces. They will be fun. They will be as nice or as simple as the user desires.

A proposal to US DOE? Never acknowledged. Some Booz Allen Hamilton contractor surely put it in the trash. Someone in Arlington answers if you call in follow-up. A real person, but without any options.

Here is an abbreviated savings comparison where luminaire density is that of an older home where 100 watt point source lighting was tolerated. New luminaires of brightness greater than B4 are down-rated in operating cost to that of B4 brightness, crediting dimming to B4, or value of the greater brightness to quality of life. Glimpse lights at 50 lumens per watt already wring out most of the potential savings. Further advances to >100 lumens per watt don't save much more in electricity cost, say another $15 over 35,000 hours, but do advance ability to live off-grid. Doesn't a more-efficient light run cooler? Advancing to >100 lumens per watt may be essential to small heat sink of a push/ pluck light.
Posted by Phil Norman at 10:41 AM No comments:

I believe in LED lighting as discrete dots in a spectrum of size/ brightness, and color. A Starry Sky . I note luminaires that fit this vision in a still-small Pinterest collection . The Lithonia 7" LED Versilite, 3000°K  is in this collection, honoring a first-visible Seoul Semiconductor AC LED product.

This morning I am looking for new Lithonia LED products, as they might relate to an interesting distribution warehouse in my neighborhood. I don't readily find Versilite in Lithonia pages, and wonder whether that warehouse might stock it. At site Illumination In Focus, ledsmagazine.com , I find something surprising:

What is this?
Edge-lit panels made-to-order.


Who is  Green LED Lighting Solutions ?
A factory in Las Vegas?

The LED technology is credited to Samsung. Search this:
samsung led light engine

Know that Samsung offers its LED engine for small round shapes as well (next post).

Perhaps only Green LED Lighting Solutions wishes to apply the technology as edge-lit large rectangles. And, is that the future of OLED? Illumination from large surfaces?

For more than you may want to know about the contractor view of being in a "green" trade show, please download a PDF album , at Google Docs. The Better Living Show is an annual event in Portland, Oregon. I participated this year with some new messages. My principal display was a working attic ladder, Fakro Model LTK 22/47 . A ladder display may inform in national controversy about required insulation value in the ladder door. An attic ladder has less thermal demand than an exterior door, and need not exceed the insulation requirement of an exterior door, about R3. Most ladders I install are about R5. Several jurisdictions in USA require an attic ladder to exceed R10, causing great confusion.

I really like the R7.5 show ladder, but can not sell it at price much higher than that of the very nice LWS ladders. I think the better LTK features are worth another $100, but that can not be for better R-value.

Here is the LTK ladder upon a display structure imagined and built for the show. 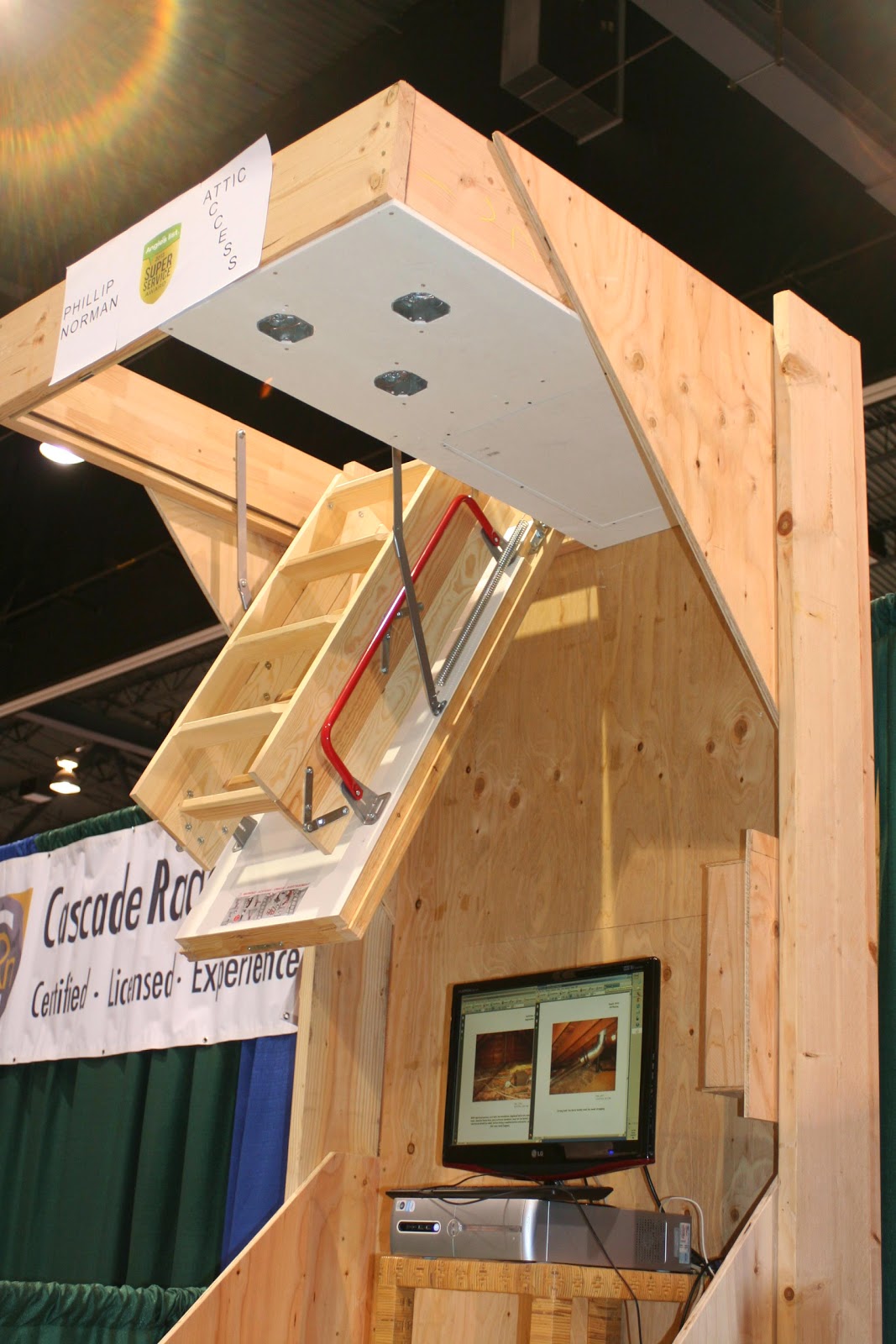 This is much nicer than confusing displays I presented at shows in 2008 and 2010: 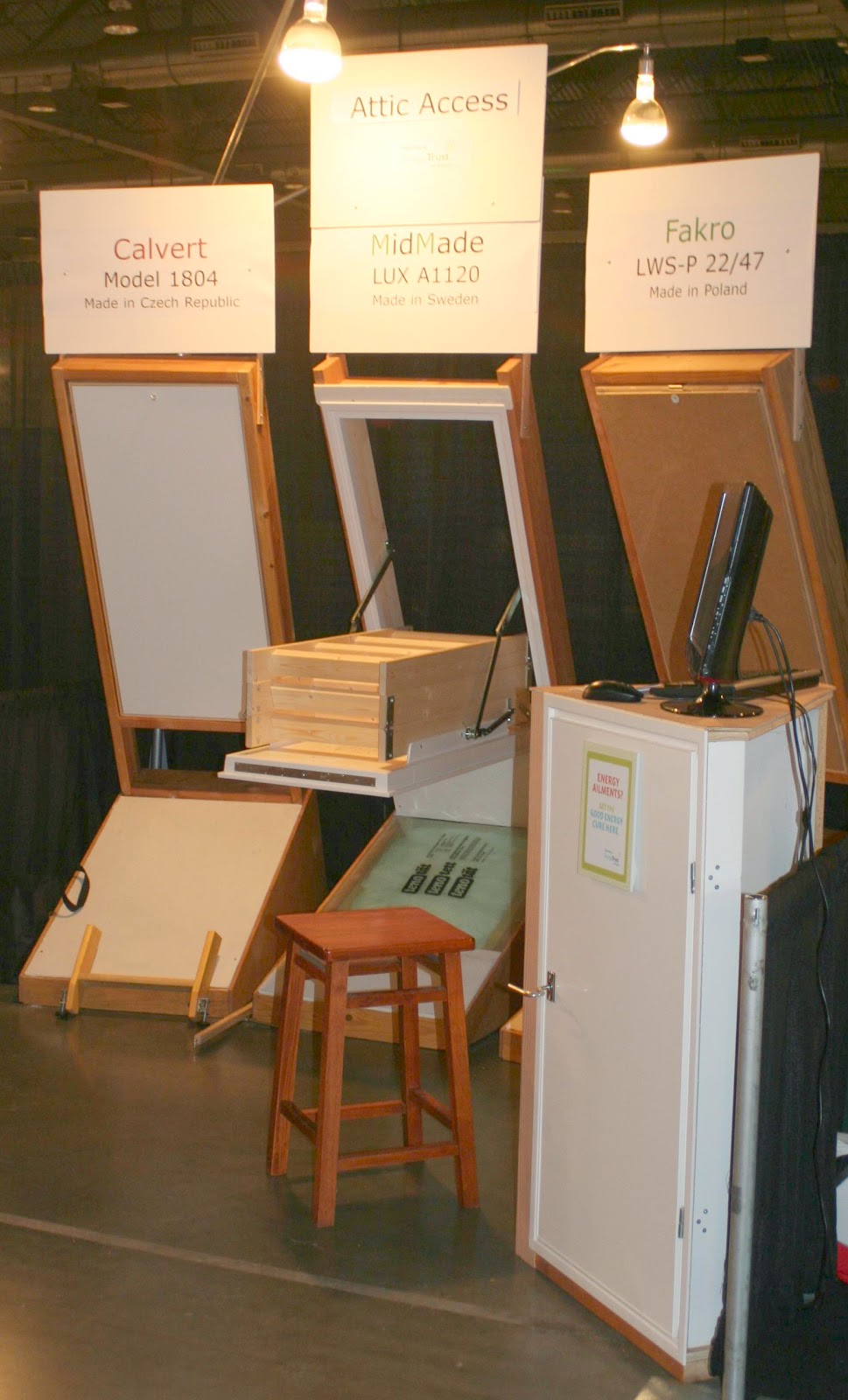 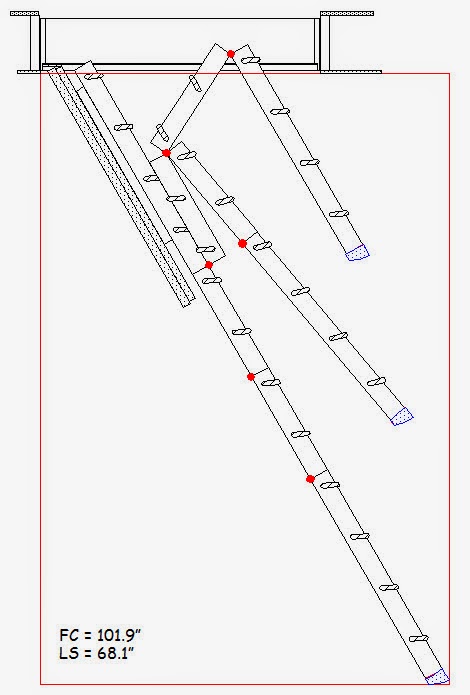 This is the compact deployment of a ladder that I achieve by cutting ladder sections, adding hinges. Please see deployment I call "friendlier", in a slide show that plays as a movie.
Compact Attic Ladder Deployment . 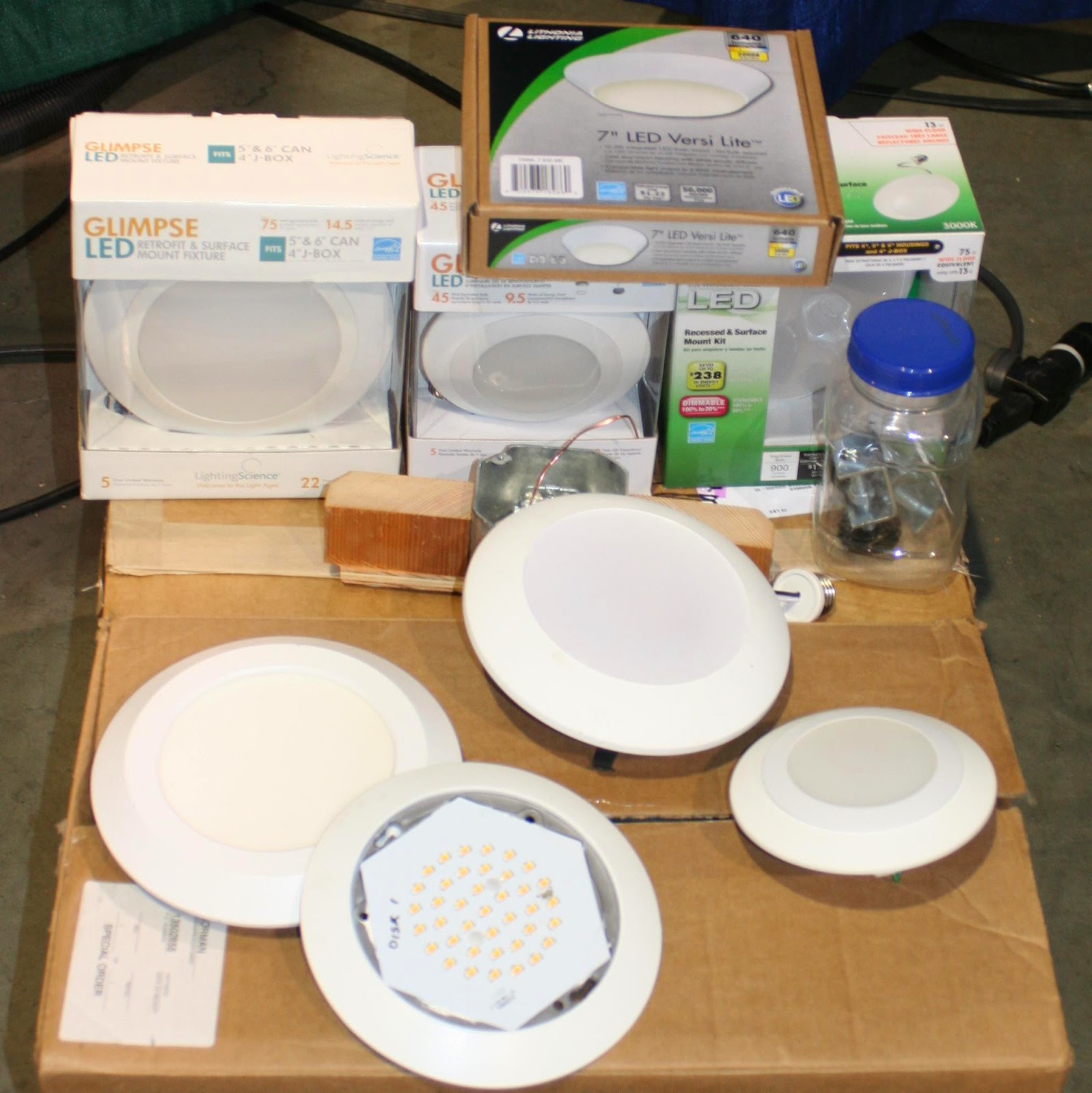 LED lights displayed are those I honor at Pinterest . Please see there how you may buy them. These lights are the subject of many blog posts . I keep a small inventory of these lights, and employ them as a large factor in weatherization savings that I achieve. 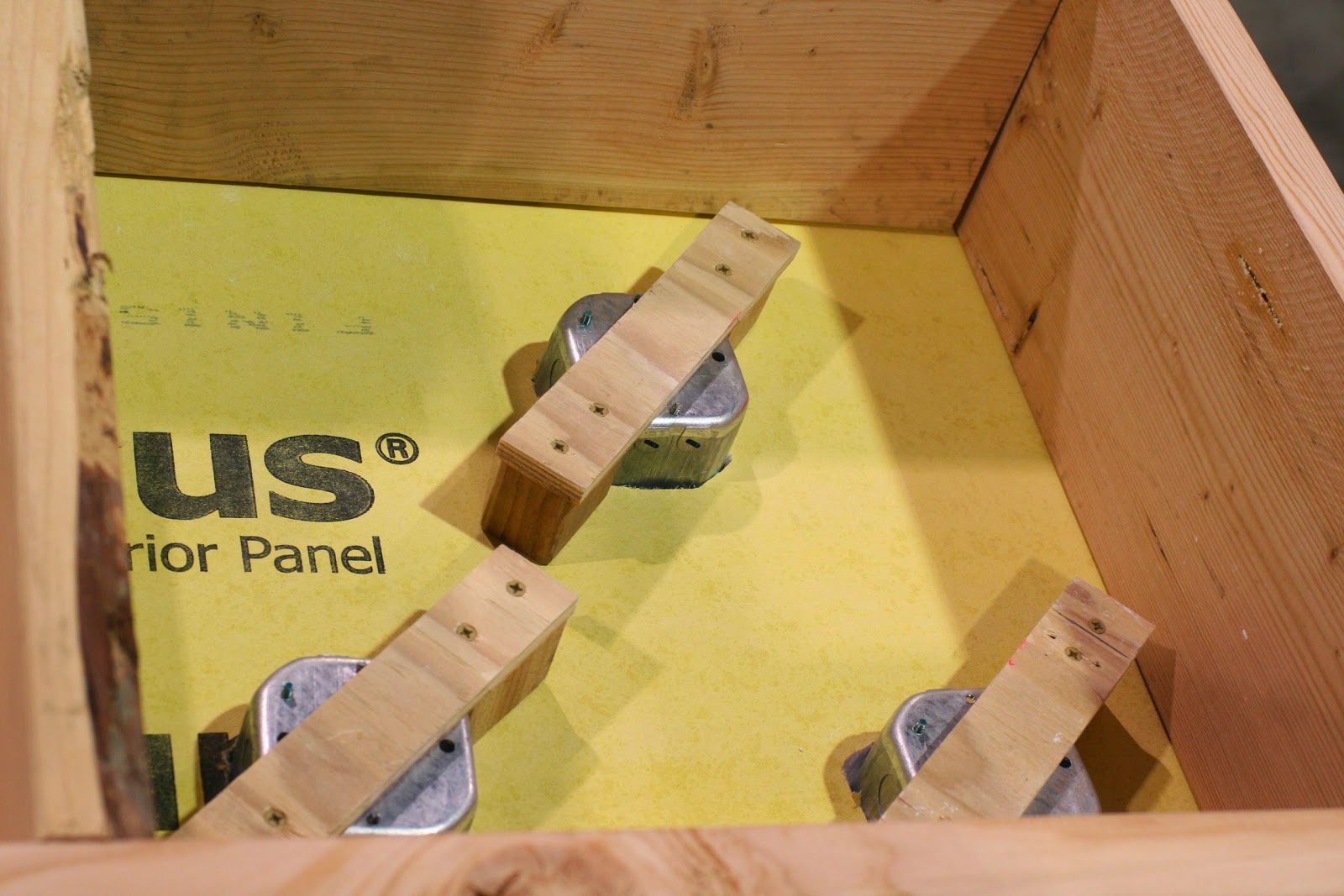 A visitor might have climbed the display ladder to see how I install ceiling light junction boxes. Here I ran out of time, and did not run wires. For more detail in this, and for other innovation in electrical device mounting, please consult this Picasa album . 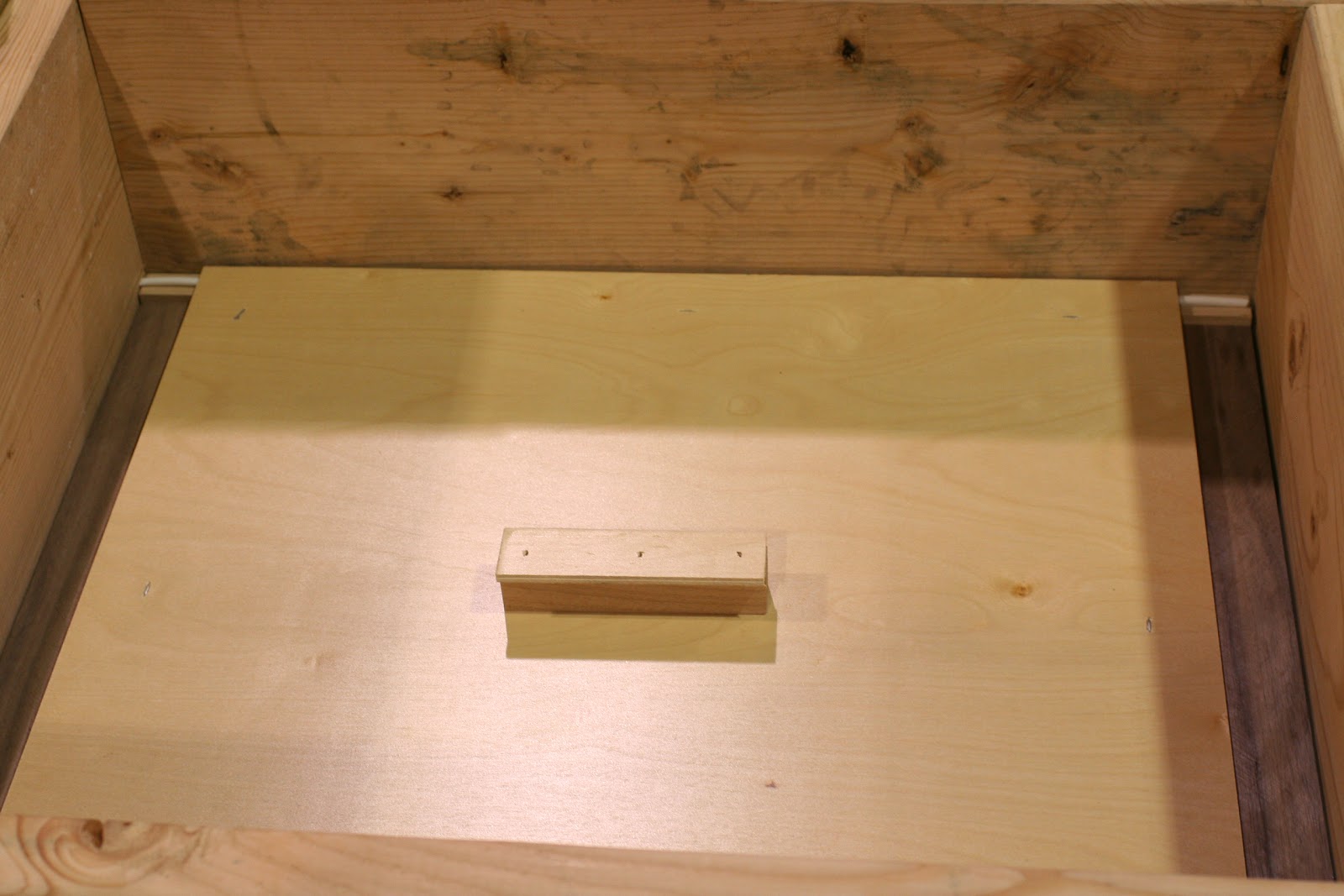 I hoped a home builder would stop by, and would order a few insulated attic access plugs. This is much less expensive than framing in and drywalling the surround of the usual leaky drywall plunker with a useless R38 batt tied on. Know the batt pulls away from drywall in closure, and has no insulating effect, just one more bad joke on new-home owner. This is tolerated by jurisdiction authorities, some smart enough to know better; here now, is exit from fraud. Exit too from harm to those struggling upon a stepladder, worried about defacing or breaking the fragile drywall, about to fall. I imagine a finger-grip in the drywall face; push up twist and tug down, and stow clean against your hallway wall. There is some weight, from 5/8" drywall for a ceiling with 1/2" drywall, compensating for gasket thickness.

Here are drawings of the show access plug. I imagine demand might establish a usual opening about 20.5" by 30" in 24" framing. 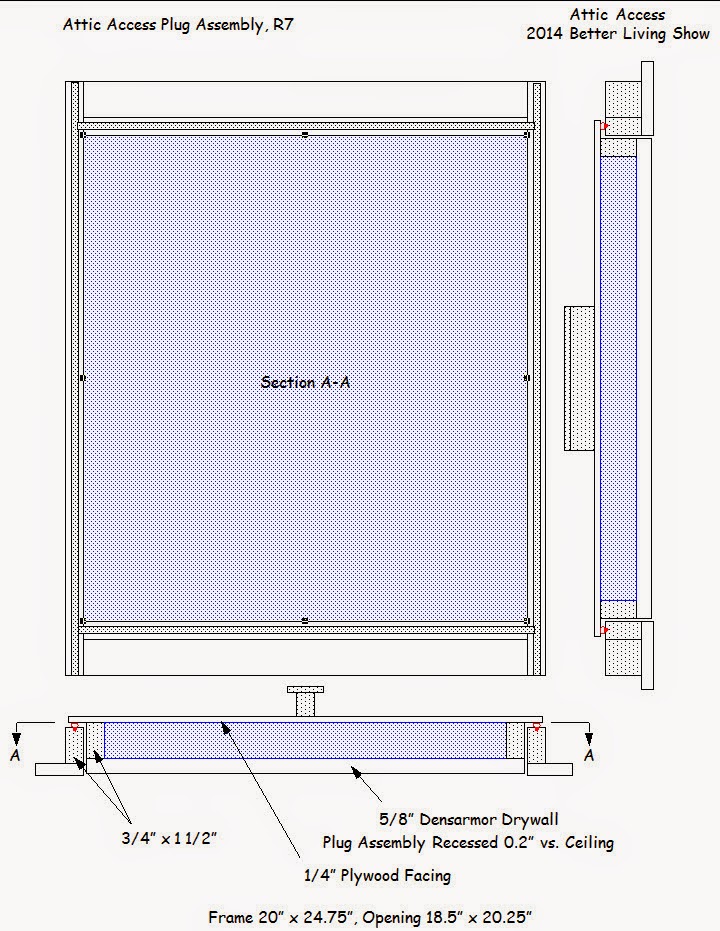 No Export of Coal

The following is a draft with hyperlinks, of an intended Letter To The Editor, of Portland's Oregonian newspaper.

Exporting any North American fuels serves only the greed of speculators. Coal must remain in place until economic factors permit power generation in solid oxide fuel cells, allowing industry in the United States to continue with fossil fuel, for hundreds of years, not for just fifty. Export of coal to Asia only finishes the surrender of our public interest, to those who have profited in shipping our jobs to Asia. Let's bring our jobs back, instead.

If Oregon can stop the export, we must. Disaster in the export, with accelerated global warming, will be a crime against ourselves even, with quick consequences. The greater crime is in disregard of future generations, our grandchildren, even our children. We are not monsters.

Continue the post:
I still think this is a matter to be handled in Congress. Our energy reserves have been regarded as a matter of national security. Now the federal government is somehow run by the speculators. These speculators write laws against the public interest, as in the secret Trans Pacific Partnership. We must stand millions strong as a blockade against TPP. If laws do not force officials to permit the evil commerce, but rather would punish them, the speculators will fail.

Posted by Phil Norman at 5:00 AM No comments: