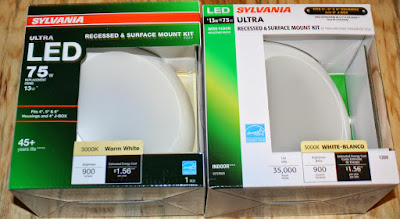 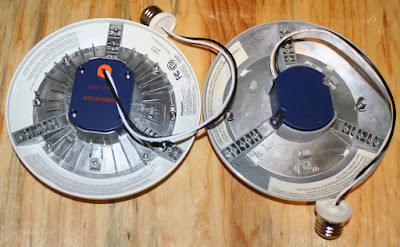 
At 5/27/2015, please know I have found and have reported to Sylvania, a serious manufacturing defect in the Model 75094 luminaires. In the photo above, please note three lugs on the backside apparently used in factory robotic handling, spaced 120° apart at about one half the rim diameter. The orientation of these lugs vs. the clips that engage the mounting bracket for installation on a junction box, is changed thoughtlessly. One lug, at three o'clock in the photo left-side, interferes with a screw head that will fix the mounting bracket to a junction box. This side of the rim, then, can not seat against the ceiling. With adverse placement of the junction box in the ceiling, one luminaire clip might not engage at all.

The poorly-engaged clip is at right in this photo with a RACO 175 junction box. 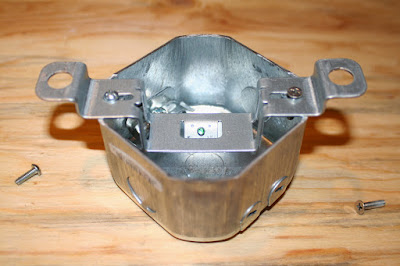 The screw head interferes with the clip whether the head is flat or round. I think the flat head screw is more adverse.

My Lowe's store would take back this light as defective, but would not have anything better to offer, unless still holding a few 70732 mod 3. At 6/1/2015, I found the interfering lug is easily nipped off with side cutters. This solution may be needed for many months, awaiting factory changes and shipping from China, and Sylvania must not declare that repair voids the product warranty.


At 7/13/2014, note issue of a major improvement of this light, that I will call Sylvania 70732, mod 2. The release is not publicized by Sylvania, so I will commend it. All criticism of behavior problems is resolved. Mod 2 lights start instantly and behave perfectly on a good Cooper DAL06P dimmer. No blinking. These lights have always been silent on a dimmer. 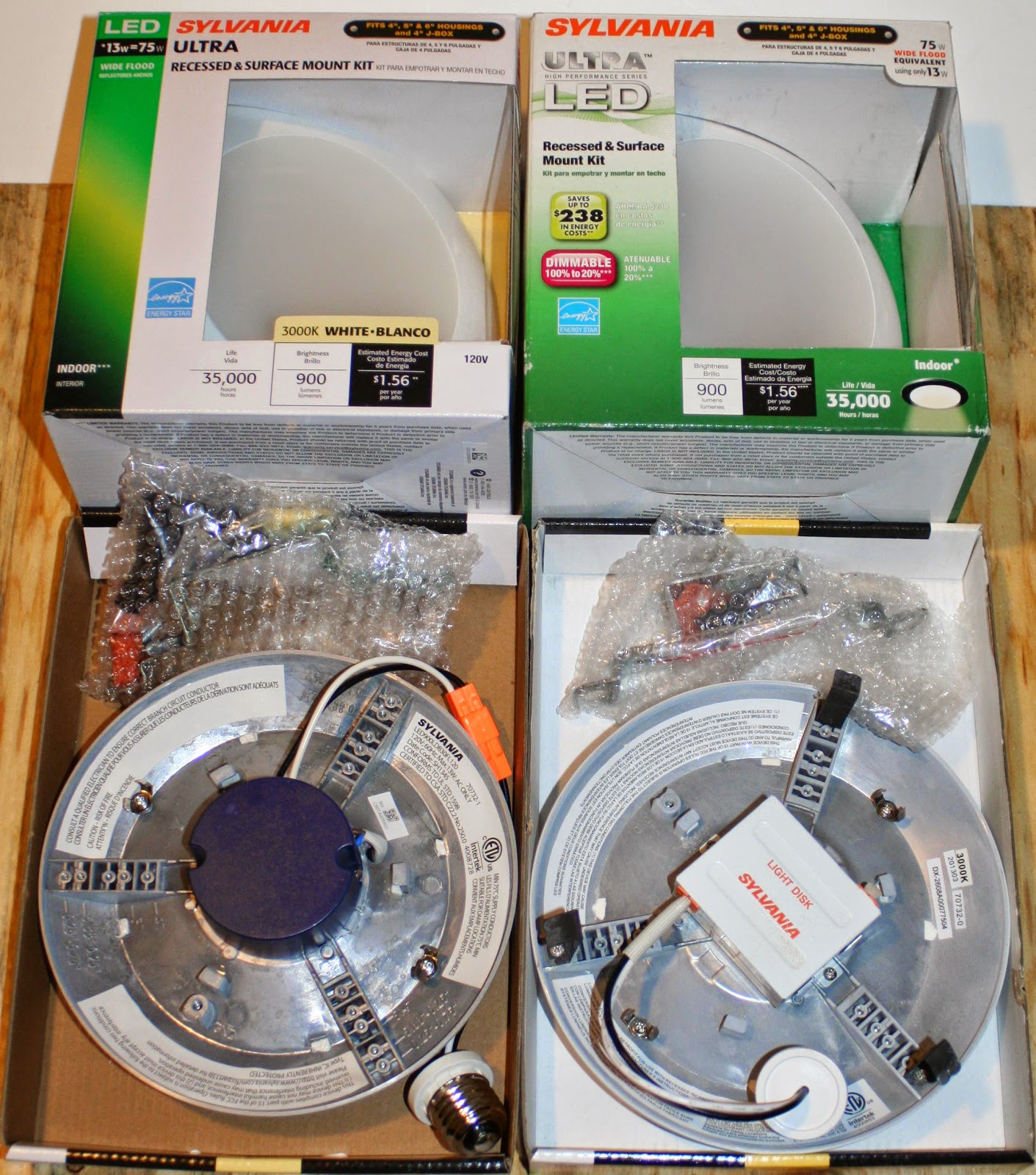 Mod 2 at left, mod 1 at right. The new quick-connect adds convenience for insertion in a can light. For installation in a junction box, an A19 plug base must still be trimmed off.


The following is post content begun 5/18/2013.
This light has recently shown up in Lowe's stores and at lowes.com. It is not in displays and is lost on the floor though in ample quantities. Is it a recessed light? Where does it belong?

It is not yet discovered and on offer at amazon.com. 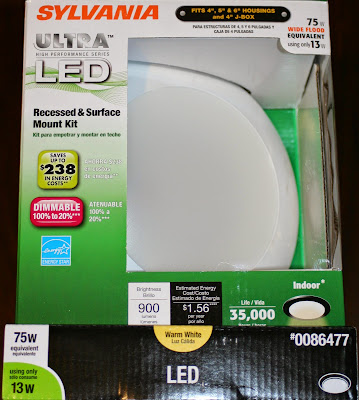 I don't know what to call it. The label Ultra LED is broadly used, for many Sylvania LED light forms, and is not helpful. The number 0086477 is not recognized in Google search today. Sylvania calls it Item Number 71911, and that too is not recognized. The UPC is below the Lighting Facts Label, and its number might identify the light. 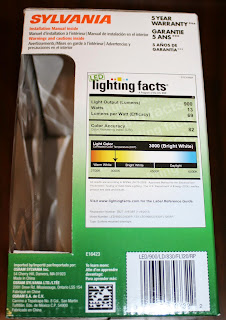 
This light, at 3000°K color temperature, is very similar in appearance and function, to former Commercial Electric T91 and now 3000°K 6" Glimpse. It is advanced in many ways. The light is fully sealed. Where mounted on a 4" junction box, it pops on and off a ceiling; while on well engaged by spring force. I will try and will report, on its mounting in various can lights.

Here are photos and captions in a Picasa Web Album. 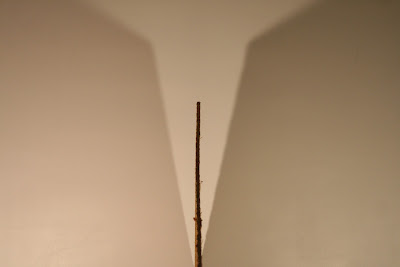 The Sylvania is at left, accepted as brighter by 20%, the lumens ratio, 900/750. The lumens per watt advantage is 34%. Will Lighting Science compete, in improvement of the Glimpse? 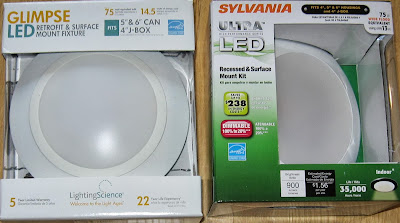 At 5/28/2013 add a new Picasa Web Album showing Sylvania installation in a can light that lacked clips for the engagement springs of a Glimpse light. I try the Sylvania in temporary replacement of a CREE/ Home Depot T67. Lumens per watt for the T67 is 650/12.5 = 52, same as Glimpse.

At 6/6/2013, add table of savings with plate LEDs including the flood bulb of the previous post, vs. point-source lights (bulbs), where the brightness advantage of directional light is included. Brightness numbers are assigned, and costs are referenced to those of a 100-watt incandescent bulb, B4. Where brightness is other than B4, multiply purchase and operating costs by 4, and divide by the brightness number. 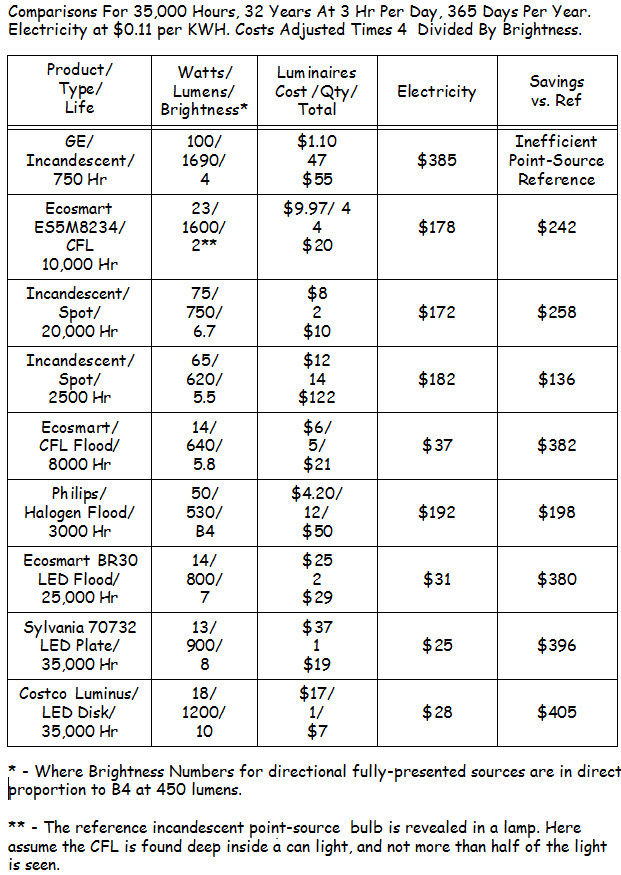 The Sylvania LED Disk light, a surface mount LED with full reveal of light, is the winner now. No CFL is still in the game, and each still playing had better be disposed with collection of its mercury (wishful thinking). Incandescents should be all in the trash by now. That BR30 LED flood looks OK, but it had better be in an air-tight and sealed can, fully covered with insulation if in an attic. The BR30 also should not be recessed. Its frosted lens should be projecting from the ceiling for Table brightness, and this will be unlikely.

Adjusting to B4 where brightness would else be greater, is by dimming. No problem with the Sylvania LED Disk light. Slight buzz with Glimpse. You will be less happy with buzz of a dimmed BR30 LED flood. With good downlighting as surface mount LEDs, no one should newly install a can light. The BR30 plays only as a substitute.

The table and following text were posted 6/6/2013, following attendance of an LED lighting trade show in Portland, Oregon. I am grateful to Google, that I may direct several important people met, to this post, and to all of its background, label LED Surface Mount Lights. The wonderfully free event was sponsored in part with Oregon Public Purpose funds via Energy Trust Of Oregon. I am unhappy that residential electricity customers in Oregon are offered only so-crummy CFLs out of Public Purpose Fund expenditures. That must change. I challenge Bonneville Power Administration and its contractor Regional Technical Forum to contradict or to accept my math above, showing that we should cease encouragement CFL installation, now rewarding installation of surface mount LEDs only.

At 7/2/2013, add observations of an installation of eight Sylvania 70732 LED disk lights, operated through one Cooper D106P dimmer. Firing from a fully dimmed condition is better than I expected. Six of eight fire in this condition, and the others readily kick on with a cycle of the dimmer slider. Photos and captions are at this web album.

At end-October 2013, this post is edited as I update all of my blog posts, to replace phrase "plate LED," with phrase "surface mount LED." Phrase Plate LED is confused with license plate lighting, and is not accepted elsewhere as a brief statement that the luminaire may be wired directly into a junction box. In my definition, a plate LED is surface mounted, not recessed for foolish styling reasons, to look like a can-mount downlight. Can-mount downlights were a consumer adaptation of theater downlighting, where upon a black ceiling, there is nothing bright to divert attention from a stage. In any circumstance other than a stage center, there has never been a bit of virtue in recess setting of a light. It has been quite disastrous in our waste of the Earth's ready fuels, that many have loaded their can lights with bulbs that are simple point sources, with no reflector bouncing to usefulness, the light that otherwise does not beam downward; all such light and heat energy, totally wasted. Look for all content of this paragraph, and more, in a new blog post under construction. While I edit out the phrase LED Plate Light, I retain the label, temporarily. "Labels" are noted at the bottom of all blog posts, for collection of related topics of interest to a reader.

Sylvania is credited with my education in terminology. All along the 70732 light has been called ULTRA LED Light Disk Recessed and Surface Mount Downlight Kit. All of this is correct. It is a downlight, and a surface mount LED. Yet education is still needed in retail displays, specifically at Lowe's. The word downlight is still equivalent in displays and shelving location, to can lights. 70732 boxes are placed on the floor at Recessed Lighting, but I have yet to find a luminaire on display in the can retrofit mode. Placing 70732s with can lights, recessed lighting, detracts from the messages they are best not placed in a can, and that we must stop placing can lights in new attic floors.

At December, 2013, add more cross-referencing of blog posts. This is the post which so far is best detectable, but is not latest and complete. Word search in the blog finds more:

Energy Conservation How To: Review, Sylvania 70732 LED Disk Light
May 18, 2013
Review, Sylvania 70732 LED Disk Light. This light has recently shown up in Lowe's stores and at lowes.com. It is not in displays and is lost on the floor though in ample quantities. Is it a recessed light? Where does it belong?
http://energyconservationhowto.blogspot.com/
Energy Conservation How To: Making Money With LED Lighting
Aug 13, 2013
This post is aimed at family which recently let me install fourteen Sylvania 70732 LED Disk Lights, $35 each on sale and emptying the inventories of two Lowe's stores in Denver. $490 there. I also spent $100 for involved ...
http://energyconservationhowto.blogspot.com/
Energy Conservation How To: 9.5 watt LED Bulb Versus Surface ...
Aug 25, 2013
May, 2013 observations here don't include yet-to-be offered Sylvania 70732, 900 Lumens, too bright for sight comparison. I don't really accept that the Cree 60W LED bulb has brightness 2.4. The 4" Glimpse, dimmed to B2.4, ...
http://energyconservationhowto.blogspot.com/

The "Making Money" post is informative of payback math. I am confident no more-useful or more-accurate study in this, exists. Please try, use and comment upon the math. The nugget of the process is that if a 100 watt incandescent bulb gives the needed illumination, how much can you save if the same level of illumination is achieved by better means.

At December, 2013, add to the payback math, bringing in the package claim, and more from the Sylvania product web page:

The package claim is savings of $238 electricity over 35,000 hours. It is the $239 number in the table above, against operating a halogen 75 watt PAR38 flood light. This halogen light is concentrated in probably a 40° beam angle, vs. 120° beam angle with a directional plate fully revealed. I have never owned a 75 watt halogen like this, but have collected many halogen 50 watt PAR 30 during LED retrofits. Consider this photo comparison, illumination from my test stand: 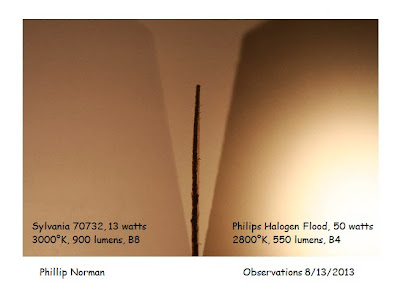 The Sylvania table claim of 1060 lumens for a now-obsolete 75 watt halogen flood would correspond to B9.4. I think it will at best match a B8 LED disk. I despair of comparing my math with that of Sylvania, for this obsolete halogen light.