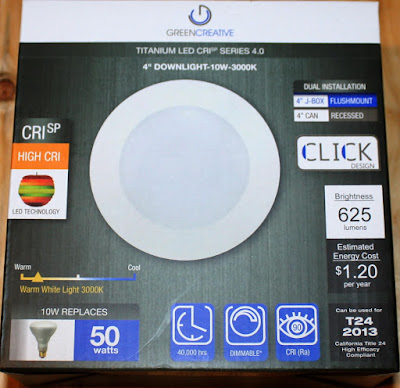 Begin with discussion of concepts, and start in that, with Brightness Numbers .

Here is naive advice from Green Creative , that gives further understatement of the task illumination achieved with this light. The comparisons are with point-source bare bulbs.

Here is one of my several demonstrations of luminaire match at B4, as sensed by my eyes and by sensors of a commonplace Canon Digital Rebel, a good DSLR camera. The available 450 lumens LED standard is a now-antique Lighting Science 4" Glimpse LED downlight  . 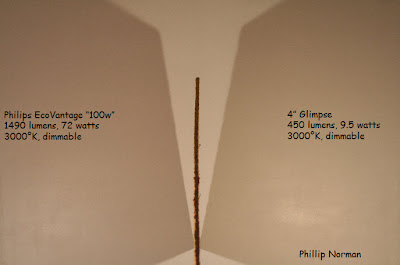 Energy Conservation How To: Beyond 4" Glimpse
Apr 12, 2014
I'm looking for a 450 lumens dot, better than 4" Glimpse . A 450 lumens directional down light gives illumination below equivalent to a 100 watt point-source light bulb. I assign this illumination a Brightness Number B4, and ...

The GreenCreative Product 40834 light is too bright to be the replacement of 4" Glimpse lights. It has Brightness Number, 4*625/450 =  B5.6. If you are replacing a dangerous, hot 100-watt bulb at last dead, this light will give about 40% better light. That is a lot. Perhaps in your closet, hallway, or over your shower, you will be displeased enough to also install a dimmer. In many hallways, you will be grateful to have more brightness than that of a 100 watt bulb. 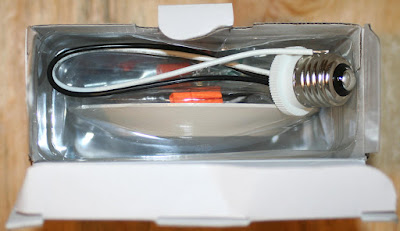 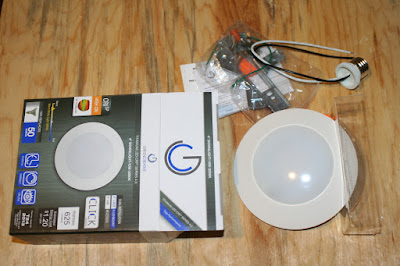 I want to put the luminaire on my test stand, mounted to a junction box. Employ a quick-connector male end from my loose-parts inventory. 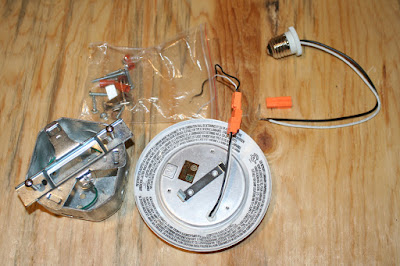 The flush side of a three-pointed bracket will be set against the ceiling of course, for junction-box mounting. This is the reverse of orientation in all installation drawings.

Box labeling includes the word CLICK. Here a  luminaire is Clicked to the bracket as it would be assembled for can light mounting. The deep side of the click slot is set upward. 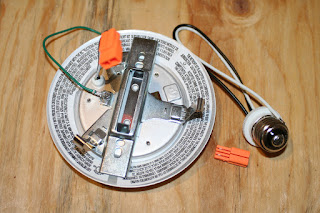 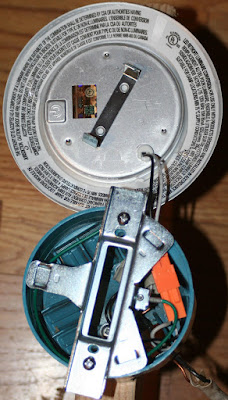 Mount the GreenCreative downlight at Stage Left in my test stand. The bracket and quick connect do quite a bit to occupy and obstruct a junction box. 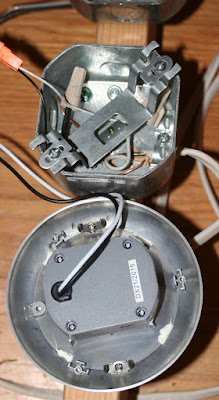 At Stage Right, mount a Nicor DLS4 3000°K LED downlight, my light most similar to the GreenCreative 40834. 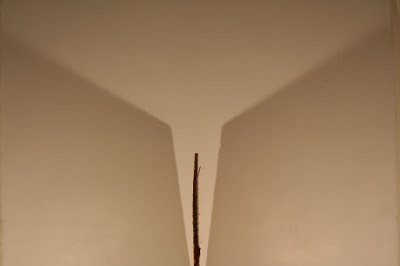 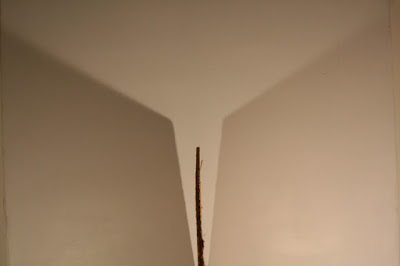 The GreenCreative 40834 dims smoothly, to a lesser light level (better) than Nicor DLS4. Both luminaires buzz as energized through a very-good Cooper DAL06P dimmer.

The buzzing of the GreenCreative 40834 is about twice as loud, but might not offend you. 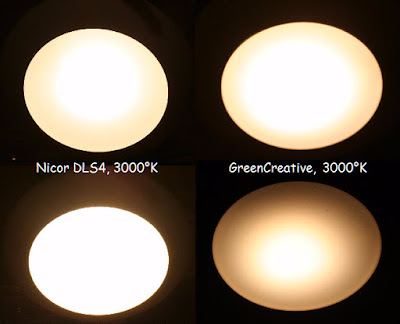 Here are photos of the lights on the test stand, upper at full power, and lower with full dimming.


Review now, one more labeling of the package front, the claim Estimated Energy Cost: $1.20 per year. This is 3 hr/day*365 days/yr*10/1000 kilowatts*$0.11 per KWH. The number does not inspire. Better, calculate the money this light will save you over its lifespan of at least 40,000 hours. Consider replacement of 100 wall bulbs on a dangerous porcelain fixture, and replacement of incandescent of fluorescent BR20 flood bulbs in a 4" can light. I have offered unique math for this, until now treating the cost of electricity as fixed forever at current 11 cents/kwh. 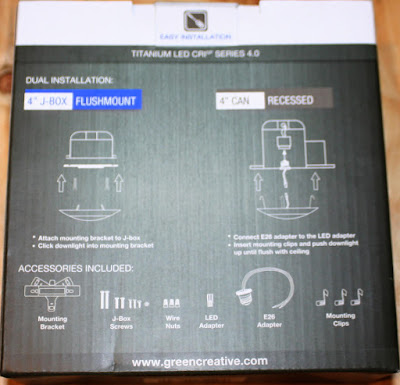 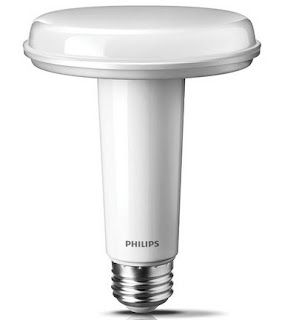 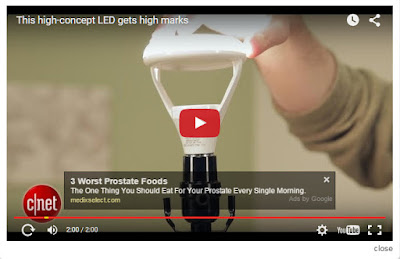 A BR30 "65-watts equivalent," 650 lumens, $15, 25,000 hours life is included in the savings table below. One of these will be the least-cost conversion from an incandescent or CFL bulb in a 4" can light. The lighted surface is probably adjustable to the face of the can and ceiling plane.

The above YouTube video states that a GE Reveal BR30 is best. I don't accept that. Perhaps it is only a little less likely to be ruined in a drop-to-be-expected. Poorer efficacy, lumens per watt, makes this less desirable. 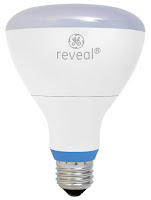 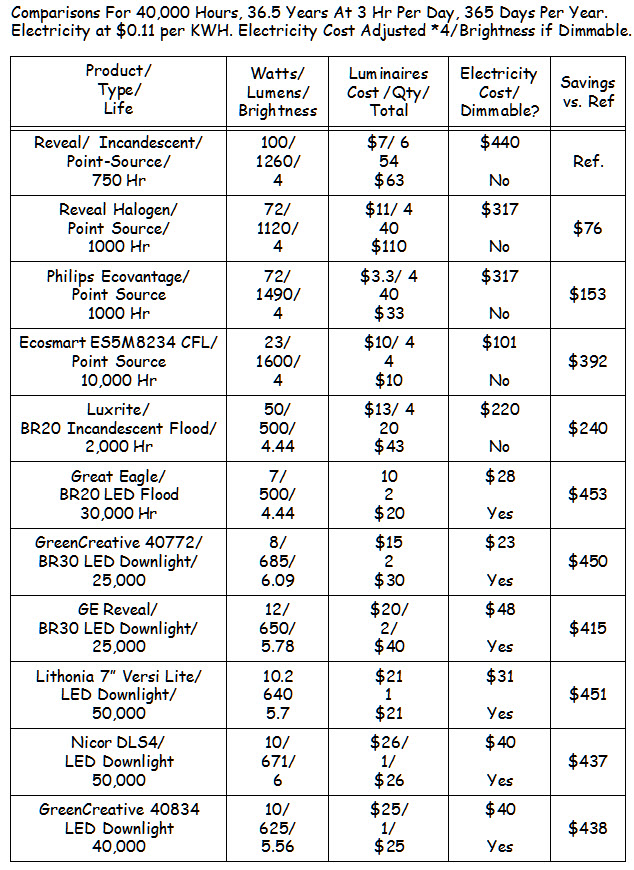 If you would retain a 4" can for your light, an inexpensive LED bulb achieves the savings, with least effort and installed cost.

There are many adequate choices. Just be sure to stay with LED and someday OLED, from now on.  There was no joy in the jungle of incandescent, halogen and fluorescent bulbs now past.


A menagerie of twelve light bulbs at the higher position Stage Right on my test stand, is compared with GreenCreative 40834. Note the ordering as for the cluster of four bulbs below. Two similar 65 watt incandescent spots at left give less-pretty light perhaps a bit brighter than GreenCreative 40834, but in unintelligent cones, concentrated with 60° beam angle. Light for general illumination, not upon some object, serves best with maximum beam angle.  At lower right see awful illumination from a "65 watt" CFL spot. At upper right, see that GreenCreative 40834 is much brighter than a 100 watt incandescent bulb. All comparisons are in a dimmer circuit at full power. 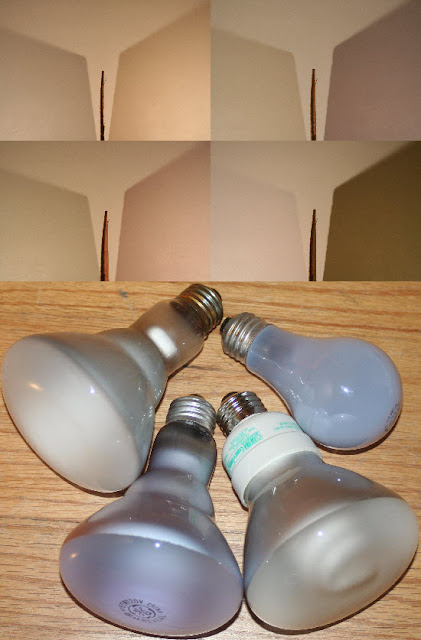 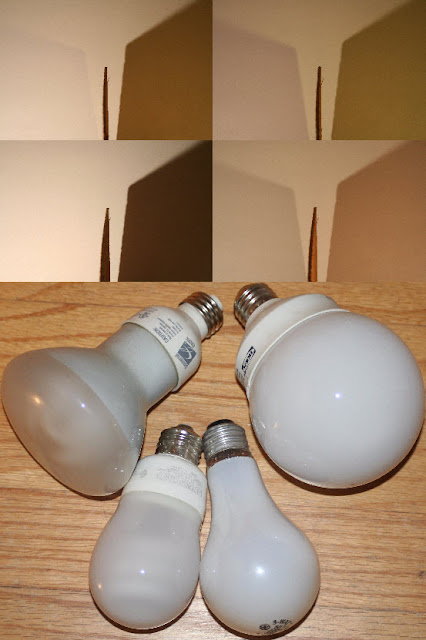 Of twelve lights in these photos, only the Cree 60-watt LED bulb, lower-right below, is dimmable. A 300 watt incandescent bulb, upper right below, is brighter than GreenCreative 40834, fragile and very hot. Good riddance to all of these bulbs. Good riddance too, to the awful fruit of the L-Prize, among LEDs tricked to act as point-source and very poor in directional application.

GreenCreative LED 4" Downlight, Product 40834, at stage left again, is very superior to an 800-lumens Utilitech response to Philips L-Prize bulb , dead end beaming as it would, placed overhead to light a room. An LED bulb, tricked to act as a point source is uncompetitive for efficiency in practical illumination. We shall wish that the US Department of Energy would do something useful in the advancement of residential LED lighting.